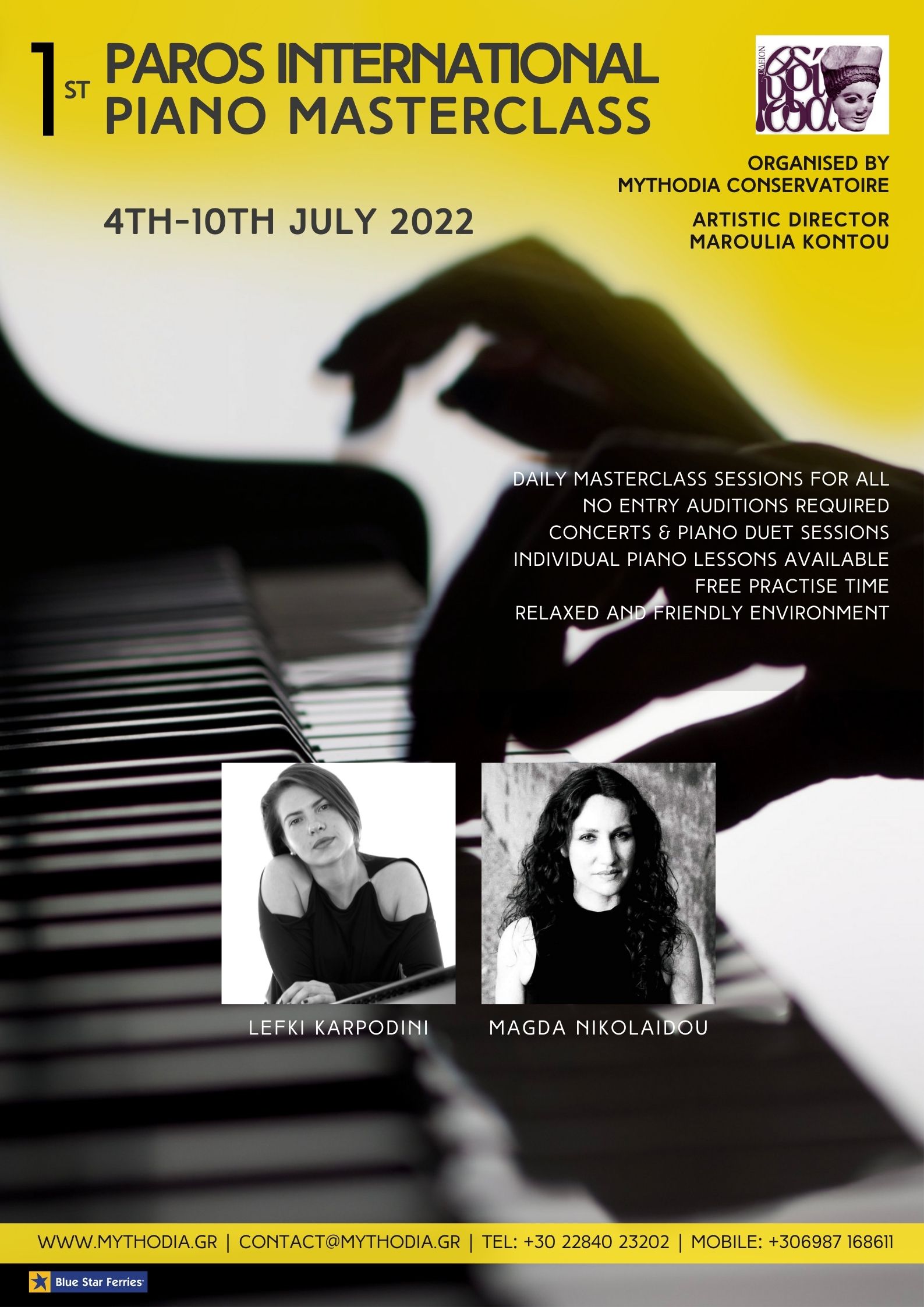 Mythodia Conservatoire welcomes you to the 1st Paros International Piano Masterclass given by renowned pianists and piano professors Magda Nikolaidou and Lefki Karpodini. Guest of honor will be the internationally renowned pianist and professor at the Royal College of London, Andrew Zolinsky who will give a lecture/recital during the seminar.
Mythodia Conservatoire is located on the outskirts of Parikia – the capital of the beautiful Cycladic island of Paros – just a few minutes’ walk from the port. It offers a quiet place to work surrounded by the unique beauty of the Cycladic architecture and the Aegean Sea.

The Masterclass is offered in two packages in order to make it more accessible to people who cannot attend the whole Masterclass. In addition to the packages, you can book extra individual piano lessons.
BIG PACKAGE 04-10 July 2022
SMALL PACKAGE 07-10 July 2022

All concerts start at 21:00 and take place at the Concert Hall of Mythodia Conservatoire.

Application deadline: 20.06.2022 (for the auditors there is no deadline)
There will be a limited number of participants, so early submission is recommended. You can apply electronically. You can fill in the electronic application form directly here.
The registration fee for the seminar is 100€ and should be paid straight after you have received a positive answer in order to secure your place. This amount is included in the tuition fee. In case of cancellation the registration fee is non-refundable. The entire amount of the tuition fees must be paid by Friday, July 1st, 2022. The amount can be paid at the secretariat of Mythodia Conservatoire or at the bank account which will be sent to you once you get accepted in the course. Bank transfer charges are the responsibility of the payer (participant of the masterclasses) and should be paid at source in addition to the registration cost. The participants will be informed about the detailed program of the Masterclass after the completion of the registrations.

You can book extra individual piano lessons with an extra charge.
The participation fee does not include accommodation in Paros. If accommodation is needed feel free to contact Mythodia Conservatoire for help.

Paros is one of the Cycladic islands of the Aegean Sea. It has its own airport and port. You can either take a plane from Athens (30mins flight-duration) or get a ferry from the mainland through the ports of Piraeus and Rafina. The port of Paros is in Parikia which is located on the western side of the island. The ferry route from Piraeus to Paros runs regularly with up to 5 ferry-routes in the summer. Mythodia Conservatoire is on google maps and you can easily find your way around from anywhere by clicking here.